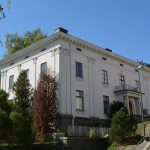 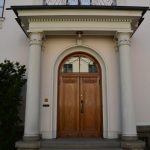 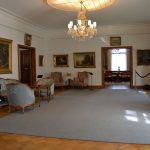 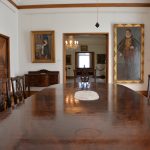 Pyynikinlinna is located in the peaceful, garden-like quarter of Pyynikki, built in the early years of the last century. Pyynikinlinna’s windows, balconies and garden look out over the pine trees of Pyynikki’s park to lake-Pyhäjärvi as well as towards the city centre, only a kilometre away.

Designed by the architect Jarl Eklund, Pyynikinlinna was completed in 1924. It is a two-storey building, painted white over a plastered brick construction and features many classical details. It demonstrates an admiration for ancient Greek and for Italian architecture, and shows its adaptation into twentieth-century Nordic classicism.

Pyynikinlinna was the long-time home of Emil Aaltonen (1869-1949), pioneer of Finnish shoe manufacture. His descendants lived there after his death. Aaltonen purchased it in 1932 to be his home but also to house his expanding art collection.

In 1984 Aaltonen’s grand-daughter, Eila Kivekäs, had Pyynikinlinna refurbished so that it could accommodate exhibitions and public events. Architect Markku Komonen designed the alterations so that the building’s original façade as well as its atmosphere of private domesticity would be preserved.

From 1983 to 2000 the building was administered by Kannus Production Oy which organised numerous exhibitions of contemporary art as well as, among other things, four exhibitions focussing on West African culture. It was during that period that the Pyynikinlinna art collection, still being augmented with private funds, was born.